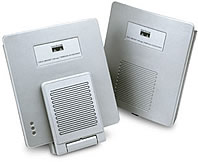 The Cisco Aironet 1200 Series meets the needs of today’s applications and protects future network infrastructure investments. The modular design of the 1200 Series provides a high-performance 802.11g configured access point that allows for either single- or dual-radio configuration. While the 802.11g-configured access point meets the needs of most customers and applications that may not have a current need for 802.11a, an easy 802.11a upgrade kit is available, to increase scalability and performance with complete backward compatibility for legacy clients. Orderable with either Cisco IOS® Software or the Lightweight Access Point Protocol (LWAPP), the Cisco Aironet 1200 Series uses radio and network management features to extend the security, scalability, reliability, ease of deployment, and manageability available in wired networks to the WLAN. In addition, when running Cisco IOS Software the Cisco Aironet 1200 Series supports link role flexibility which provides both access point and bridge functionality through configuration of each radio as an access point, repeater, root bridge, non root bridge, or workgroup bridge.